Yesterday I sat down with a friend who doesn’t use Facebook at all and has no way of seeing what I’m doing there.  I also did another video and wrote the equivalent of a blog post but on Facebook.  I really prefer Facebook over any social medium thus far (including Medium), but this video and the topic is so interesting I’m copy pasting the post down below.  But, don’t get used to this.  If you’re a Facebook user and want to see more stuff from me, then you can follow me, you don’t have to friend me and I won’t see all the private photos.  I don’t care about food pictures and whether or not you had diarrhea this weekend or whatever else that could be considered TMI for an office water cooler conversation is posted out there.

Earlier today (9/24/15)Dan Berschinski and I took a ride around the Stanford Shopping Center in a Toyota Camry that has been fitted with sensor technology enabled hand controls by Kempf. When the driver pushes in the acceleration ring on the steering column sensors convert the motion into a digital signal that accelerates the vehicle. The hand brake is connected to the foot brake pedal and when the hand brake is pressed the pedal at the floor of the car moves although you can’t quite see it in the video.

Martine Kempf from Kempf Controls was showing us the car. She also shared with us how her father relied on hand controls because of Polio and patented the use of an accelerator ring in 1955. Over time as cars have changed the Kempf technology has changed and improved and now it is absolutely smooth. I really liked using the ring to hit the gas but reflexes and habits had me braking with my foot. The experience is somewhat like driving a motorcycle except motorcycle handlebars don’t spin around as much as a car steering wheel.

Dan and I met last year where I was speaking at an event and we’ve kept in touch since then. He lost his legs in Afghanistan and lays claim to being only one of two Americans who have lost this much of their legs and still use prosthetic legs to walk. He was my guest at the VLAB – MIT Enterprise Forum, Bay Area event on Human Augmentation that I worked on last year. The video of that event now has over 27,000 views Check it out here if you haven’t seen it: https://www.youtube.com/watch?v=dsKCWlYK9-M

The advances of technology for both restoring and augmenting human capacity are absolutely amazing. I love how technology is making life better for people with disabilities, which are actually different abilities. With those different abilities today’s technology can close so many gaps. Technology infused hand controls that replace metal rods that can be clumsy and dangerous with a far improved product and user experience are one example of technology closing gaps.

But driving is not the only thing technology is impacting. The design and science in Dan’s legs which are by Ottobock is far more advanced than amputees could have used only a few decades ago. Further advancements are being made by researchers including Dr. Hugh Herr, Professor of Biomechatronics at the MIT Media Lab who has created and uses two robotic prosthetic legs.

Dr. Herr will be the keynote speaker at the upcoming Gizworld Conference – Wearable Tech & IoT on October 27-28, 2015 at the Santa Clara Convention Center. Dr. Herr will also serve as panelist on another Human Augmentation panel during the conference alongside the head of robotics from SRI International and the CEO of WHILL Inc (world’s smartest wheelchair see http://whill.us/). It is exciting to see Internet of Things technology accomplishing such amazing things and I invite you to come experience and see it first hand at the conference. Use discount code JOSH20 for a 20% discount at this link:http://gizworldconf.com/san-francisco/

Next Monday and Tuesday Pasadena, CA becomes the IoT Capital of the world with the GizWorld LA conference in the Pasadena Convention Center with special guest, City of Pasadena CIO Phillip Leclair.  I have a 50% discount code for you below.

If you’ve been following me on Facebook, something I recommend that you do, then you’ll know that I am heavy into planning the global series of conferences for GizWorldConf.com. Everything at GizWorldConf is focused on the Internet of things. The Internet of Things is changing and it is changing rapidly. Why is that? People are beginning to understand that the Internet of things is more than hype and it is actually a value generating tool. It has implications for generating value in all areas of enterprise and stands to be the most disruptive innovation since the Industrial Revolution.

During next week’s event I will moderate two value-driven sessions and participating in a Fireside Chat with MediaTek.  The two panels are:

I am looking forward to engaging with the Internet of things entrepreneurs and leaders that are participating in the conference next week. One of those is Jerry Wilmink, founder and CEO of WiseWear who I’ve written about here on my blog and here on FashNerd.com because #WearableTech should and can be beautiful and seamlessly integrated into life. If any of you are in the LA area and would like to meet feel free to reach out (easiest way to get me is probably Facebook).

If any of you are interested in participating in the conference and would like a last-minute deal on an expo or marketing package, please let me know and I’ll be happy to set you up. The attendee registration link & code are: GizWorldConf.com and code IOTLA50 for a 50% discount.

There are some inaccuracies in wearable technology. Take this example from my Apple Watch during this weekend’s 17.5 mile ride on the Los Gatos Creek Trail: 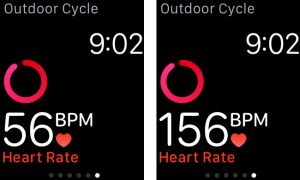 The one on the right is correct.  When I saw it was 56 I dried under the watch with my shirt and it quickly re-registered with a more appropriate reading for someone who just hauled himself up a hill.

What do we do? Do we give up on ‪#‎wearabletech‬ because of inaccuracies like this? No. It has nuances but still generates enough value to justify the cost.

How does it generate value? It’s the little things that counts. Seeing the current temperature, my next appointment and the date at a glance are all little things that add value.  Over the weekend I was busy at the kitchen sink with wet hands and someone called me.  Have you ever stuffed a wet hand into a pocket to fish for a phone?  If you do get it out, do you think about the people who have dropped phones in kitchen sinks?  With the watch I simply touched my wrist with my wet pinky finger and took the call.  Another little thing.

In reality, though, I don’t want to have to touch the watch.  I want to say ‘Hey Siri answer the call’ and be totally hands free.  Even though voice as the preferred interaction isn’t there for this use case, the wet pinky beats drying hands, pulling out the phone to see who it was and then answering.  But, little things, remember, and the value add with the current experience is a little thing.

You can set the Apple Watch up to do some pretty cool things with other IoT devices and services that add even more value.  With an IFTTT rule I can flick my wrist and say “Hey Siri: Text Phillips Hue ‪#‎off‬” then hit send and moments later my connected bulbs will shut off. Pretty cool, unless you’re my wife and at home using the lights while I’m out showing off at tech meetups – sorry honey. But you know what would be even cooler?  If I didn’t have to touch the watch to send the text.  Perhaps Apple can get a setting for that incorporated into the watch OS soon.  But even if that doesn’t happen in the near term, there are still enough little things that the watch does to justify its daily placement on my wrist.

Both Target and Sears have smart home concept stores full of consumer #IoT devices.  Check out these video tours of their retail experiences for a glimpse at what the #ConnectedHome can do for you.

Learn more about solutions available at the Target concept store at OpenHouse.Target.com.